The Orchid, the Vase, the Engine

If the digital age has witnessed a surfeit of contentious categories across erotic relations, as far as certain applications complementing android technology have come to intimate to its users procedures which may alter desire and how its humanoid extensities can be facilitated, then Ikaw Ay Akin should be seen, or at the least, argued to have anticipated Filipino notions of the “polyamorous” and the post-modernity of its rupture even within heterosexual machinations. I have seen the film several times on television and video, but its recent digital remastery has allowed me to reflect on how films “of relative domesticity,” a description felicitously phrased by my colleague Nonoy Lauzon in his own critique of the film, can still outshine the sleekness of contemporary romance peddled by some of our millennial filmmakers, affirming a suspicion that technological independence has prevented the cinematic intellection of social predicament, such as sexual politics.

Written by Jose Carreon and directed by National Artist for Film Ishmael Bernal, Ikaw Ay Akin’s preoccupation is Rex (Christopher de Leon), an orphan who has inherited a jeepney talyer. When he isn’t managing the affairs of his workshop, he finds intense gratification in skydiving. These instances of labor and leisure situate Rex within a premise of objects as determinations of character. Engines moving around on land and in the sky define the young man of dynamic ambition. And yet, the film does not only regard things as correlative aspects of person; they are also configurations of how people are led to behave in a certain way within a social arrangement. Persons are drawn to certain objects, and become custodians of a particular set of machines, because it is through this array of properties that the social can emerge.

When I say “social,” I am not flattening the discourse to the question of class. What is achieved by reducing Rex and his appurtenances to bourgeois typicality? Although it is possible that this insight could be the crux in another critic’s account of the movie. Whether the dissemination of the social is through commerce, which is replete with macroeconomic assignations of polity, or through a form of consumption when the economy turns into the privations of domestic habit, an understanding of fetish can only be in order, and later, at stake. Reification, when persons are altered into things, is the core argument of the theory of fetish, and the screenplay explores with pointillist fastidiousness the strategies of alienation overdetermining the terms of commodification, particularly when Rex enters the conundrum of erotic relation as a polyamorous subject.

Rex’s confusion between two women of distinction is a symptom of the fragmentation that he cannot quite resolve even when confronted with the clarity of ethical choice. Should he remain with Teresita (Nora Aunor), the horticulturist, or could he also experiment with Sandra (Vilma Santos), the ceramic designer? The former is patient, the composure of her conviction to love is as sure as the inflorescence of her orchids, while the latter is intemperant, with a susceptibility as fragile as the make of her singularly hand-painted vases. Rex confounds the métier of each woman, subjects them to comparison, and minimizes the demarcations between Teresita’s science and Sandra’s art, to stage a proprietary competition whose rules of play are orchestrated along complex binarisms, such as the intervals which distinguish baroque music from jazz (Teresita’s rhythm as kindred to Antonio Vivaldi, and Sandra’s tempo as intimate with Cole Porter), and the syncopations which can be employed so that natural predilection (Teresita) or nurturing ambivalence (Sandra) can be referred to through the contrapuntality. In this tense pageant of which act of loving can persuade the polyamorous to decide on his erotic fate, Vilma Santos must enunciate confident speech and Nora Aunor should articulate buoyant silence. It’s only matter of time, the film intimates, before whatever remains as solid in the fragment melts into air, just like a foil character who spends his days repairing clocks, and wasting away for a love that can no longer fulfill a promise. Santos is given all the clever lines, and plentiful are her instances of frenetic acting; but with that finale screening all manner of logorrheal excess, including the man who claims he has made up his mind, Santos’s appeal to disagree with romance comes rather too late. When that happens, Christopher de Leon has already engineered a range of sentiments to implode from within a dramatic apparatus wholly his own that he earns to right to disappear from the scene of contest. With this engine gone, the orchid takes over the vase, and breaks it, my poet-friend K. S. Cordero interjects. And yet: to what end is the flowering and the shattering?

After 37 years, Ikaw Ay Akin becomes a materialist indictment of the patriarchal deceit cisgender passion must contend with, opening up the queerness that emerges from feminine confidence as zone of alternative feelings. And, of course, Nora still punctures the assault with an imperturbable will to punctuate the sentence, despite the adages of her time failing to utter competitive affection, convincing Vilma that the encounter isn’t just about female rivalry, but also masculine decadence. 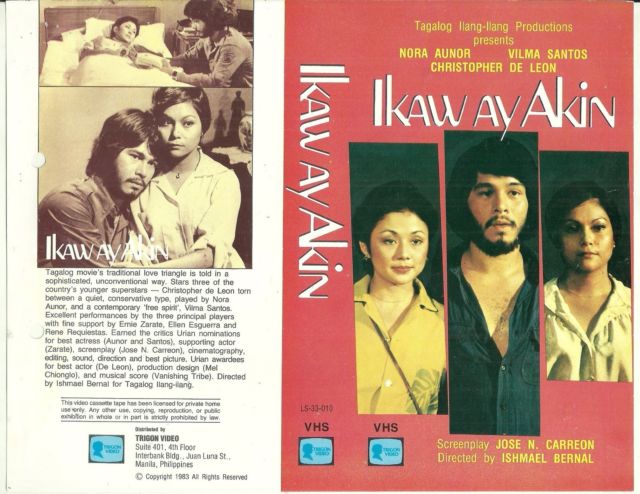 4 responses to “The Orchid, the Vase, the Engine”