Spanning the course of a few decades, from about the 1970s to the present, Mariquina finds Imelda Nuñez, née Guevarra (Mylene Dizon, and, as a teenager, Barbie Forteza), reexamining her relationship with Romeo, her father, from whom she has long been estranged. Death is what occasions such remembering: at the beginning of the film, an unkempt, desolate Romeo (Ricky Davao), well past his prime as the best shoemaker in Marikina, takes a last bite of a take-out meal and tightens the laces of each shoe—actions, it is revealed, that compose the prelude to a suicide. Amid the general tumult affecting her garment firm on account of a bungled order, Imelda finds herself pressed into service for his wake: her particular task is to secure a pair of wingtip shoes in her father’s size—for all the care that he took during his final moments, he lost his footwear when he made his fatal leap off the railing of a bridge.

An only child, Imelda grows up in the ease and comfort made possible by the success of her father’s shoe factory, but trouble brews and finally erupts between her parents when she reaches high school. Chafing at her marriage to a man whom she loves no longer, Leonor (Che Ramos), Imelda’s mother, reaches her breaking point and decides to strike out for the United States on her own, leaving Romeo and Imelda behind. Into the void created by Leonor’s departure steps Tess (Bing Pimentel), Romeo’s business associate. In much the same way that she helps Romeo steer his company through sundry crises—Tess is a far savvier entrepreneur than he is—she stands by him in his time of need, eventually becoming his lover and domestic partner. Sometime after, Imelda jumps at the chance to follow her mother to Hawaii, setting the pattern that endures into her later years, even after she returns to the Philippines: a life without Romeo. 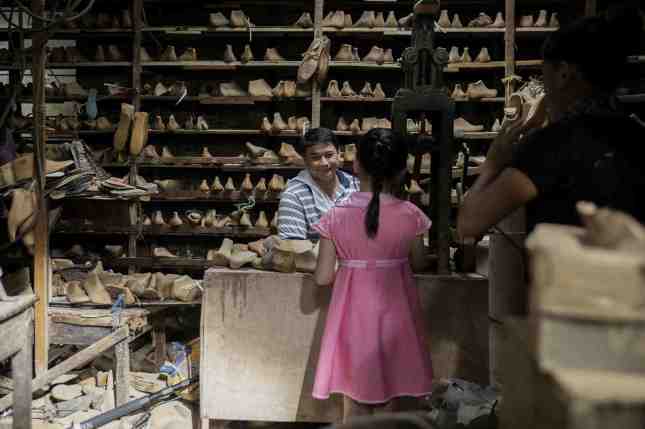 Adopting a deliberate pace and working chiefly in hushed tones, Mariquina layers loss upon loss as Imelda, over the course of her search for the perfect pair of shoes, finds herself weighing the flaws and failures of her father against the apathy and abandonment that she visited upon him when he was still alive. Scenes from Imelda’s younger days track the slow disintegration of her family—a process of decline that takes place nearly in tandem with the massive transformations of their locality and country during and after the fall of the house of Marcos.

The character of Imelda requires significant exertion from Dizon and Forteza: Forteza seems perplexed by the challenge to evoke, during pivotal moments, something other than puerile petulance, while Dizon falters in her attempts to add nuance to a stolidity adopted in the face of grief. That the strata of sorrow running through the film build up to compelling effect is more to the credit of Davao, Ramos, and, most especially, Pimentel, whose performance breathes complex life into her shrewd, vulnerable “other woman”.

While the events of the film are aptly grounded in time and space, evoking, by way of the cinematography of Sasha Palomares and the production design of Aped Santos, the surfaces, depths, and textures of its milieu with diligence, the film, to its detriment, exhibits a kind of myopia or carelessness—perhaps both—in its consideration of history and memory, of the personal and the political. This defect comes to the fore when former First Lady Imelda Marcos appears onscreen to deliver a few speaking lines. Her scene as such is of little consequence to the story, and it is precisely for this reason that it is able to disturb: the objectionable implication is that the glittering madam—who has more than once crowed that those who raided Malacañan Palace during the heady days of the first People Power Revolution found that her closets contained only shoes, not skeletons—is ultimately incidental, gratuitous, dismissible.

Jaime Oscar M. Salazar is a graduate student of the Department of Art Studies at the University of the Philippines Diliman. He works for an international humanitarian organization.

Posted by yccfilmdesk on 21 April 2015 in Uncategorized

One response to “Layers of Loss”